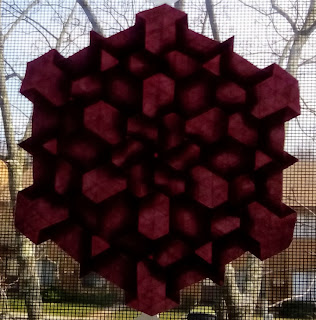 This was one of my first attempts at a somewhat complex tessellation pattern. It was conceived sorta randomly. I knew I wanted to start with a star at the center. So I began with a small hexagon surrounded by triangle twists radiating from the points.

From there I kinda just alternated between teardrop, hexagonal and triangular shapes. As the pattern moves outward there are some choices as to which direction in which to lay the folds. This is entirely personal preference and changes the design only slightly.

I think it wound up as a rather interesting structure and pattern. Definitely one I've not seen elsewhere. Which is always nice.

The back lit effect is very pretty in my opinion.

I've been working on generating a crease pattern for it. I'm still learning that skill though.

Anyone with a little experience can  probably work out  what's going on from looking at this non back lit photo.  If you do wind up folding it, I'd love to see your results. 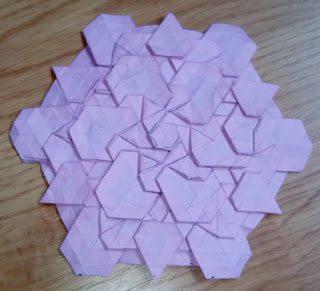 It's a 32 division grid, but as with all tessellations, larger and smaller variations are possible.

It's funny... I've noticed folders have directional preferences for twists. I have a strong predilection for counterclockwise. In fact, I find it extremely difficult to do a clockwise hexagonal twist, even though counterclockwise is easy peasy. This may be because I'm a southpaw. I have noticed some other people's designs favor the clockwise. Just something to think about next time you begin to fold.
origami tessellations