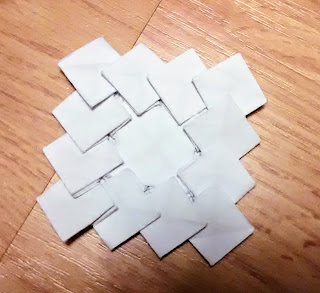 I had some paper collapsing fun the other day at work. This John McKeever design was something I'd tried maybe a year ago with limited success. This time around I finally got it right.

It really is an insanely difficult crease/collapse pattern. I found it so vexing to transfer to the page that I decided to just print the pattern and then cut out the square from there.

Once I did that, it was actually quite enjoyable to collapse. In that frustratingly hard origami kind of enjoyable way.

To facilitate the collapse I did all the folds in both directions. So even though the design calls for specific valley and mountain folds, all of mine were genderless. This helped in getting the paper to cooperate. I just used regular printer paper. Nothing special. 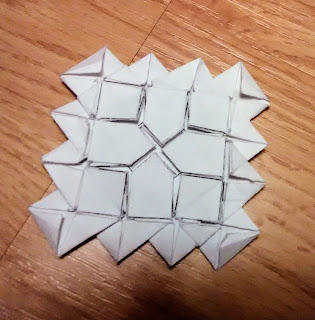 I find a lot of regular priced origami paper weakens too quickly on tessellations and intricate collapses. The pulpy nature of printer paper helps give it strength for repeated folding.

I collapsed the middle according to the design, but the outer squares I just made sure I was getting squares without concern for which direction the corners were overlapping. I fixed that later after the middle was set and all the squares were fully collapsed and nicely creased.

I really like the pattern that's created on the back as well.

The crease pattern is from McKeever's flickr page. His name for the design is Fujimoto Style Escher Steps.