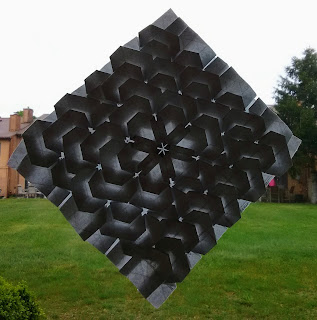 This tessellation is the result of repeating as closely as is possible the classic dual hexagon collapse. You have the smallest hexagon and then the next largest concentrically.

The small hex is a valley fold and the larger on is a mountain. You collapse the large one on top of the smaller one and flatten. It's a pretty standard origami maneuver. In this case I just repeated it as often as possible on a single sheet of paper.

It's very similar to the spread hex tessellation.

In the middle I  squashed the flaps that formed from the collapse.

You wind up with a lot of overlapping pleats that you can arrange as you see fit. Or you can do some more squashes. They can also be turned into triangle squashes.

The other side gives off a nice star effect as seen in the third image.

To create the crease pattern simply layout the concentric collapses in offset rows with one pleat between each repetition. All of the folds, except for the squashed on the central star, conform to a standard triangle grid. 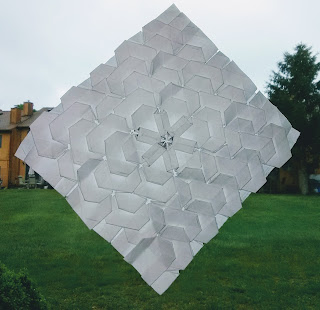 If you laid this design out a little further apart between repetitions you could probably get more apparent star iterations.

But this close together they overrun each a lot.

You could however, experiment with the placement of more pleat squashes or triangle squashes.

There are many patterns to be culled from how you arrange the pleat overlaps, if you have the patience to arrange them more meticulously than I have. 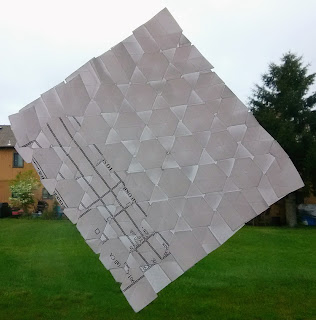