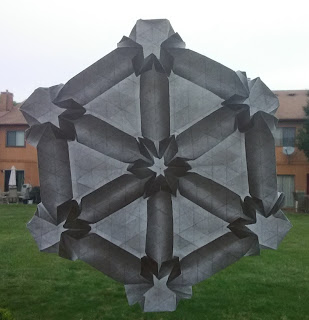 I was trying to reverse engineer a tessellation from Lydia Diard. I'm still not sure how I figured out the steps to recreate it, but somehow I was able to do so. Just folder's instinct I guess.

I did a mini one flower version to figure out the basic structure. Then I did a bigger version where I screwed up the tiling. That version led me to discover how to properly tessellate the design.

Her flower iterations were a little bit closer together though  Wish I'd done that. Then I could've had whole repetitions around the edge.

Funny thing is, although it's a pretty simple set of folds, it was quite difficult to execute. Or it was for me.

Once I did the central portion, it was not easy to do the outer iterations. You can't really flatten the paper during the process. So it's not easy to keep previous folds intact while you're working on new ones. 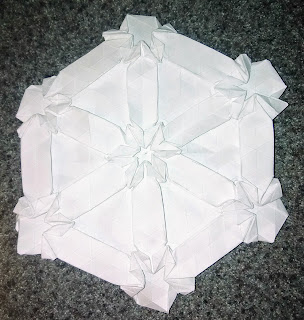 Some of the fold are quite small. So prefolding, unfolding and refolding wasn't a successful approach.

I fianlly just flattened the center as best as possible and very gingerly worked the outside.

A new version with the tiling closer together is something I'd definitely like to attempt. For now, I"m pleased that I was able to figure out the basic technique to recreate essence of the structure.