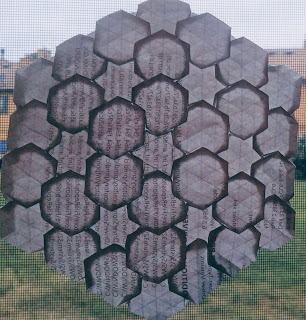 It's time for a new origami tessellation.

This time I've folded someone else's design. I found the original image somewhere on flickr and did a reverse engineer on it.

It's a beautiful design that's actually quite easy to execute. I have a pic at the bottom of this post of my crease pattern notes that I used to recreate it.

It's larger hexes that are manipulated to form negative space stars at their centers.

Further proof that some of the simplest designs produce the most stunning results. 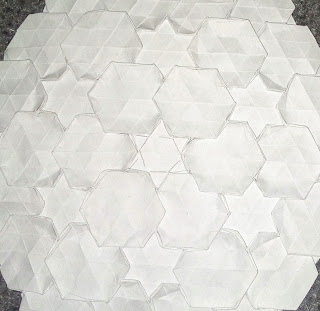 Basically, you lay out the central star as triangle points off of a small hex. Then you arrange the large hexes in a circle around it. Triangles naturally form in between.

You kind of waterbomb the triangles and then fold over the corners of the hexes to create the stars.

Rinse and repeat as needed. It's very simple to tessellate as the triangles begin to form additional large hexes radiating out from the center.

There's no need to figure out how additional iteration will occur. They form naturally off of the central design. 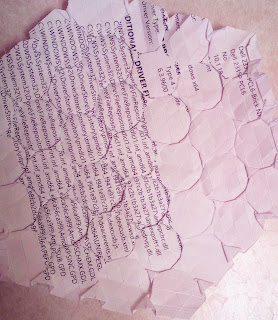 The large hexes are on the standard folds of the triangle grid. They are not classic open back hex twist which are offset from a classic triangle grid.

The waterbomb triangles that connect them are all on the natural folds of the grid as well.

You trisect the triangles to to create the inner folds to collapse them. Those folds are new. The folds to make the corners of the hexes overlaps to form the stars are also new.

The backside of the tessellation forms a really interesting pattern too. It winds up looking like circles with tiny triangle squashes all around. 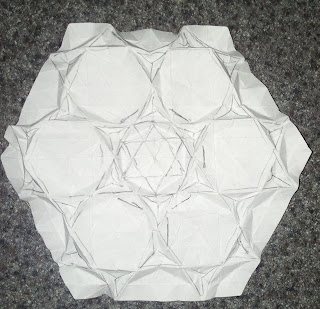