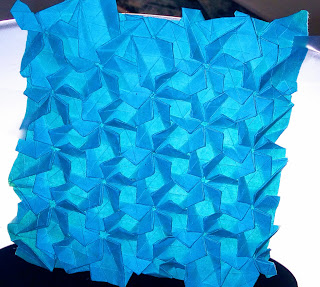 Here's an interesting origami tessellation that I worked out. I struggled to photograph this in a way that showed its complexity. In the northeastern winters it can be hard to get enough light.

Small hexes on the rear collapse into the next concentric hex on the front. From there open back triangle twist surround each.

When the folding is complete that's when the hard part comes. Trying to arrange the flaps on all those triangles so everything flows in the same direction and lands neatly is a bit of a Machiavellian madness.

I folded over one side of each triangle in a counter-clockwise direction. This created the pinwheels. Many of the fold overs do run into each other. But it is not difficult to make a congruent intersections. 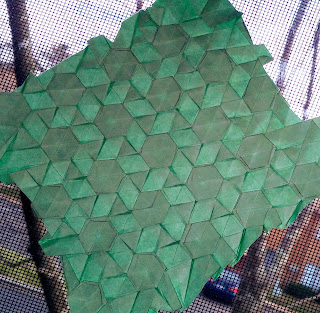