Showing posts from February, 2019
Show all

Tessellation Open Back Hexes Both Sides 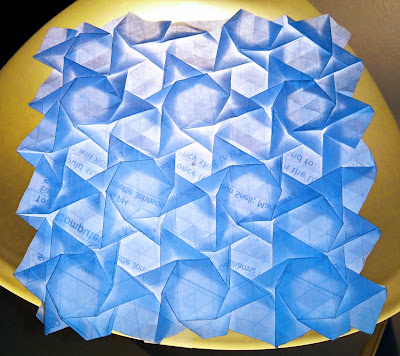 This is an idea I had. It's pretty simple, but yields a complex result. What I like best about it is that it's versatile. You can create several different tessellations from this one crease pattern. It's open back hexes connected by triangles. The triangles actually follow the folds of the classic grid. I have a sketch that I need to upload. (Update: crease pattern image added below) The hexes alternate directions. Some are exclusively on the back. Some totally on the front. Others go both ways. The triangles are all 2 mountain and 1 valley. What's most interesting about this tessellation is that it offers the folder choices. You can arrange the hexes in in many variations from front to back. I haven't explored it in great detail, but I did play around with the arrangements a little bit. It's pretty versatile. Different patterns emerge depending on how to decide your valleys and mountains. There's a flow to the mountains and valleys of
Post a Comment
Read more 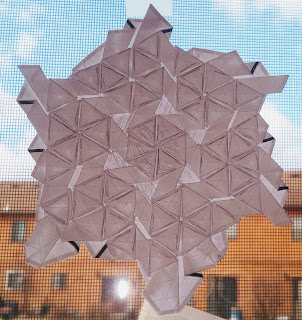 I found the crease pattern for this tessellation on flickr. It was a while ago. So I don't remember where exactly.  It may have been a Joel Cooper design. I'm not certain. Upon further investigation, I found it on my hard drive and it's filed it under Robin Scholz. So I guess he's likely the designer. I did change it. There were originally larger gaps between the triangle twist hex formations. I shrunk the gaps a bit. Made it fit in a smaller grid much nicer. This was an incredibly difficult fold. Super tricky. Diabolical really. At first glance it looked so simple and innocent, but it was anything but. The end result is pretty amazing. It gets exponentially more amazing the bigger the grid you use. Even though I folded it myself. And I spent several hours doing so. Looking at the end result, I still have a hard time believing that's just one square of paper. But it is. It truly is.
Post a Comment
Read more 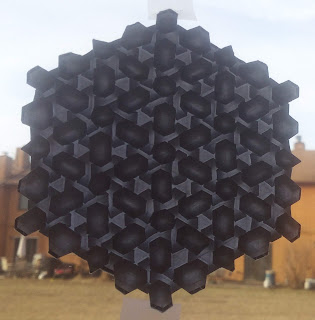 This is a pretty straightforward design, but I really like the results. It's no doubt been done before, but I conceived of it without having seen anyone else's prior. I attempted a 64 pleat grid at first, but found everything to be entirely to small to work. So I switched it to a 48 pleat. It was still pretty small, but just big enough for me to successfully fold. I printed a hexagon on printer paper. As large as would fit. Then divided it into thirds on one side. Anything smaller really doesn't do the tessellation justice, as there are insufficient repetitions. Small hexes are flanked by pointy rectangle shapes. The rectangles are 3 pleats from each axis of the central hexagon. Then just repeat. I found it easiest to fold by first reinforcing all the hexes. That made it much less frustrating to move outward from the center iteration. I was then able to fold at will any of the pointed rectangles and the hexes were quite willing to fall into place. The photos
Post a Comment
Read more
More posts