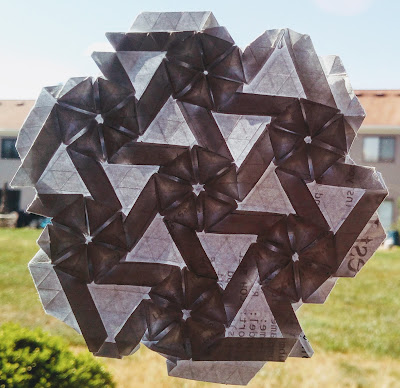 Here's another Scholz amizade tessellation that I somehow managed to figure out. It helped having done some of his other stuff before and knowing his folding style. He really likes overlapping and reversing folds back in on themselves.

Personally, I find it difficult with the overlapping pleat folds to get going out from the center. The middle is usually fairly easy, but then executing the radiating repetitions off from that are quite the struggle. Especially since it's all rather symbiotic. Each one is connected to and dependent upon all the others in its circle. Such that you can't fully execute them one at a time. You have to gently ease them all into place as a set.

You definitely need a great deal of patience. It's going to take time to work those fold into place.

I didn't realize at first it was small hexes on the back. I saw the triangle twists on front and thought of the next hex up that you can easily turn into a very similar set of triangle twists. But that didn't work at all with the large triangular spaces.

Eventually I realized he wasn't going to use such an easy way of creating those tightly packed triangles and I remembered it could be done with smaller hexes as well. Once I had that as my starting point, the rest was pretty easy to figure.

The rear of mine did not turn out very pretty, but I've included it as a visual aid for understanding the overall structure. 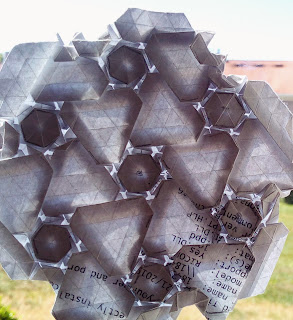