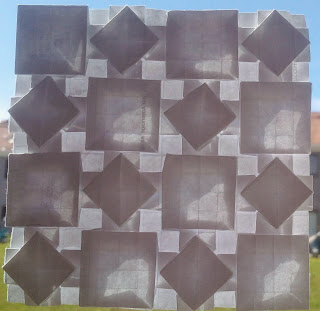 I've seen this tessellation many times on google, pintrest and flickr. It's originally designed by one of those famous origamists that we aspiring origamists know and admire. I just can't remember which one. I want to say Scholz or McKeever, but I'm not sure.

It uses a square gird, which I'm not terribly good at using. I'm more of a triangle grid type of folder. Don't know why.

But it was pretty frustration free to puzzle out how to fold this. They are pretty basic shapes. Once it occurred to me to start pushing stuff backwards and in on itself, I was well on my way.

Even though it's a pretty simple design, it's a really cool result. It's also, probably a great learning tool for those interested in the structure and mechanics of square grid based origami tessellation. 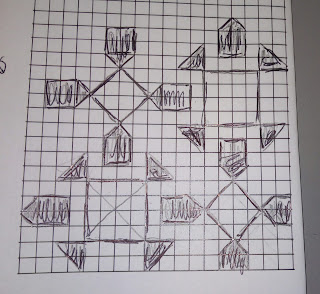 I've provided a crude sketch that I used to document my reverse engineering process.

I sometimes get frustrated when I see people's beautiful origami tessellations, but no crease patterns or clues are provided as to how to replicate them.

Sure, it can be a fun challenge to try to suss it out yourself, assuming you're able to do so. On the other hand, it can be frustrating to struggle with a finished idea and fail to discover how to recreate it yourself.

So if you're not feeling up to figuring it all out on your own, this will certainly provide you with a big head start.