Cogs in the Machine Origami Tessellation 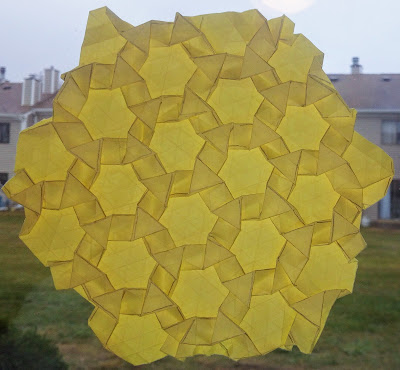 This is a slightly more complex variation on a previous tessellation that I did a while back.

There are rhombuses, triangles and hexagons all working together.

In my version the triangles and rhombuses are mountain folds, while the hexagons are valley folds.

When I first began folding the crease pattern, I was just kind of winging it. I wasn't entirely certain where I was going with it. So I wound up with random mountain and valley folds.

I later unfolded and refolded following the consistent pattern shown. 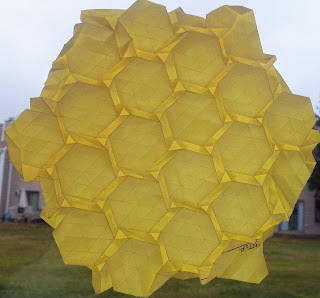 I thought about folding it differently, where the genders of the folds in individual modules went in alternating directions in some kind of pattern. That would probably be really interesting, but the paper didn't feel strong enough and I didn't feel patient enough.

Normally, when I think of triangle twists my mind automatically goes to the classic offset triangles that do not follow the standard lines of an origami triangle grid.

But there are many possibilities to be culled from using the triangles naturally found in the grid. This tessellation demonstrates that.Only the rhombuses are offset. The hexagons and the triangles are all natural. 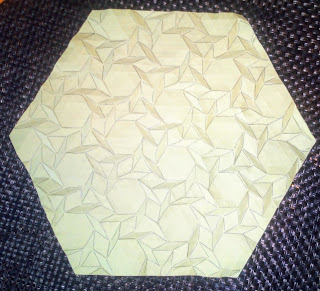 It kinda folds and looks similar to a flagstone, but it is not a flagstone.

I've included my crease pattern below.

As always, it's possible this has been folded before, but I haven't found it during my searches.