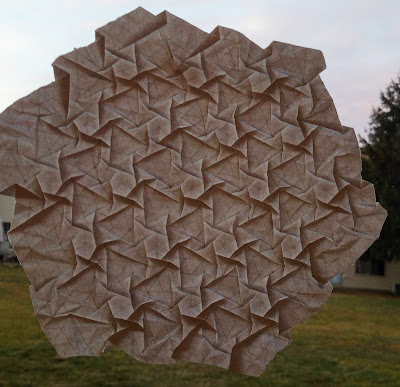 It's about time I added a new origami tessellation. This one was as frustrating as it was satisfying. My paper was not cooperating, but I persevered.

I've explored similar designs. This one took it a step further. It uses the smallest rhombuses natural to the grid to connect an array of stars that are formed from offset hexagons and the resulting triangles.

When you fold an offset small hex twist small triangles naturally form. This creates the stars.

A typical hex twist follows the normal grid lines of a triangle grid. These hex twists fold bisecting the grid lines. However, unlike traditional open-back hexes, they are the smallest hex available on the grid. The hex shape itself does follow the grid. It's only the twist that is offset. 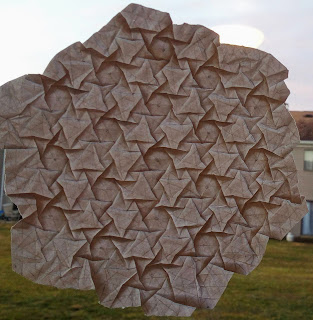 I actually have a crease pattern from my planning stage which I haven't yet photographed. That would probably explain it better than words can. I'll hopefully upload it soon.

There are also larger triangles on the reverse side. They're that in between size. Bigger than one pleat and smaller than two pleats.As I was working out the design on a smaller grid they readily formed in the spaces between the stars.

First pic is front. Second is reverse side. 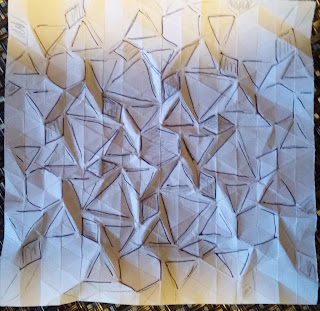