When you google origami tessellation crease patterns something called the waterbomb flagstone tessellation comes up in the top results.

It looked pretty simple, but I found it rather fussy.

I really need to start working with better paper.

Unlike your typical flagstone, which has triangle twists on the rear, this has little rectangles. It's a familiar pattern that still proved quite difficult.

The front is offset hexagons and natural triangles. The back side is the rectangles.

It feels almost like it's not meant to lay flat. But it also feels like it could flatten with a stronger paper.

I didn't bother to flatten it with weights or books. All the time I spent working the folds were enough to create the intended pattern. It seemed like if I tried to make it entirely flat, it would be ruined.

You can see the rectangles in the rear view. 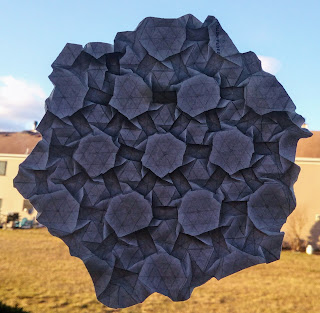 I've fiddled with rectangles and hexes before. But this was a whole new level.