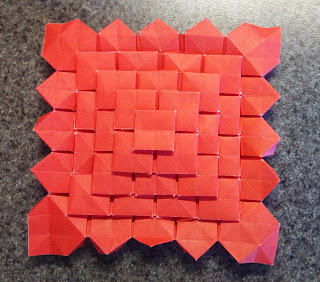 I was going through my boxes of origami. I had four shoe boxes worth. Most were already photographed and documented here, but I found a few early ones that had not been.

One of the earliest tessellations I ever attempted and succeeded at was the high density clover. It's a variation on Fujimoto's clover design that creates a multitude of layered squares using only a single sheet of uncut paper.. Depending on your patience the density can increase ad infinitum.

I learned how to fold it using a video tutorial at happyfolding.com. That site and its author, Sara Adams, really taught me alot. Great site.
If you follow the steps and keep at it you're rewarded with a really impressive final model.

Once you understand the structure, it opens up other possibilities for creative variations. .