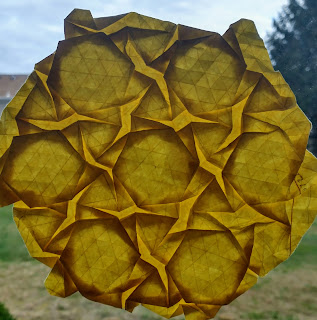 Fiddling around on google searching for crease patterns I came across an image from a site called gatheringfolds. It was a single image of four different folded tesses. None of which were crease patterns, by the way, google. Hint. Hint.

The image is copyrighted, so best not to post it here.. But I liked the designs.

When I clicked through to investigate I learned that the site sells their crease patterns and tesses.

I like figuring these things out on my own anyway. So I worked out one of them so far and was able to fold it also.

I have the crease pattern I drew, but since they are  charging for their designs and they have copyrights posted, I don't suppose it's right to publish that here. 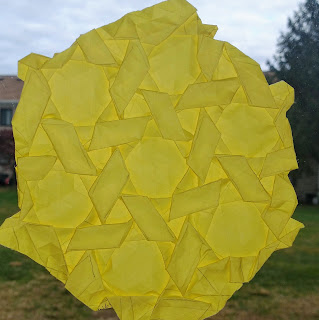 If you like the design you'll either have to sherlock it on your own or pony up the money to purchase it from them.

It's an interesting pattern. It's pretty humble on the front without backlight. But when you light it up on the reverse side it really sparkles.

It was a nice departure from my typical obsession with complicated flagstones.

I also really like that parallelogram shape they used. It feels like it has way more possibilities. 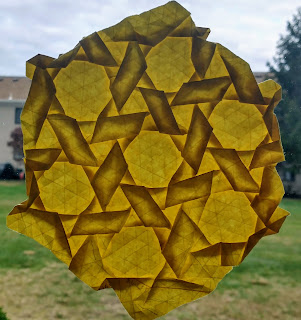