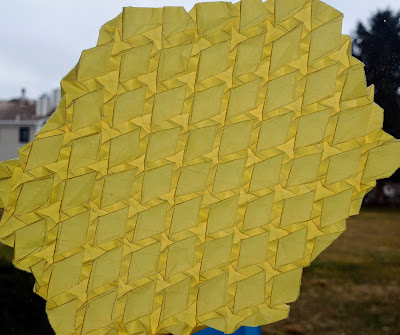 There are a lot of origami flagstone variations on the rhombus fold. I've folded quite a lot of them. Both those imagined by others and a few I've sussed out on my own.

This is one I've never encountered in all my google searches and flickr hunts. Maybe because it's too simple. Maybe because it doesn't backlight nicely. Who knows why no one else (to my knowledge) has folded it.

I actually just came across it accidentally. Just started drawing on the paper not really knowing where I was going with it.

The front design, which is the one I drew on the paper before folding, is very simple. An endless wave of rhombuses all swimming toward some mysterious shoreline not yet visible.

I didn't give much thought to the other side. I came to realize during folding that triangles were popping up on the back. Makes sense. I should have foreseen this from all my other experiences with similar designs.

What's unusual with this configuration is that the triangles can go in multiple directions and still work. I did not realize that as I saw the triangles forming and just folded any which way the paper presented.

So it's very organized on the front, but a bit random on the back. 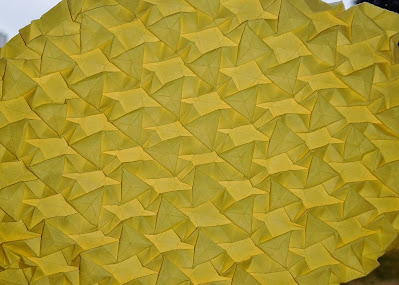