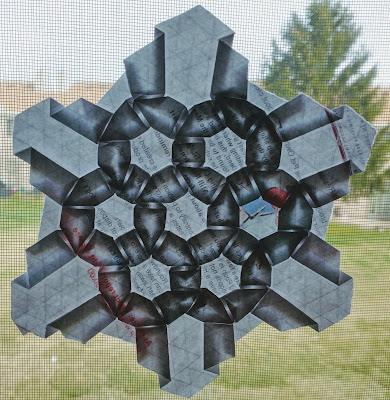 I've been kind of short on origami tessellation ideas lately. I've done so many tessellations over the years that the well begins to run dry. Creativity is part of it. But geometry imposes its own limits.

I know there are many variations that simply don't occur to me. I discover it all the time in the work of others.

A single mind has its limits. Especially mine. There might be thousands or more undiscovered possibilities, but I can only ever hope to ever find a small fraction of them.

Still I persist and found this one.

A bullet shape that forms around hexagons. Some rectangles were required to make it work. Although not a true flagstone, it is folded in the same sort of way. All the shapes are connected by those angular arms that allow them to nestle closely together. 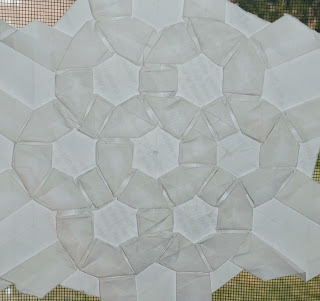 In order to fold it successfully you'll need to work both the front and the back simultaneously. Still, overall, it's not super difficult for an experienced folder.

I don't have a crease pattern for this model.

However, one can easily be extrapolated from the pictures of the model and various other crease patterns I've uploaded that use the same folding technique.

One very straight forward instance can be seen in this photo.