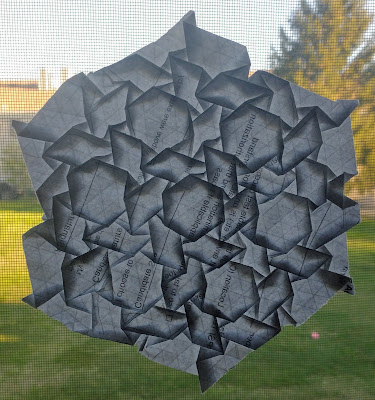 I found the crease pattern for this tessellation sitting in google photos. I'd saved it a long while ago and then forgotten about it. I don't remember where I found it. I don't know to whom it belongs or from what site it originated. I'd be happy to credit the designer if I could.

What I do know is that I was able to fold it. Which was no mean feat. This was truly one of those agonizing folds where you know it can be completed, but it's just really, really, really difficult to do so.

Maybe it was because I used pretty crappy paper. It looked like it would be simple. So I thought cheap paper would do.

I was very wrong. And then wrong again and again.

Maybe it really is just one of those painstakingly tedious tessellation to fold that I both love and hate.

Perhaps, a little of both.

At any rate, it's a pretty neat result.

Left side is the crease pattern for the finished fold above.

Again. Not my crease pattern. Don't know whose it is. All credit to the person who thought it up.