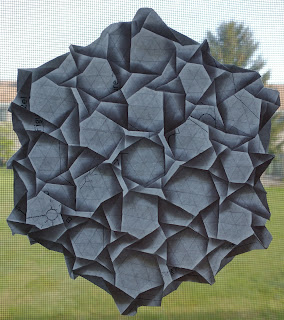 This is a variation on the open back hex twist and natural triangle tessellation. Instead of repeating the the hexes, they are half hexes, also referred to as trapezoids.

In order to repeat, you just use a mirror half hex off of each of the center hexes. Easy peasy.

This was my idea. Of course, it may have, probably, has been done before. But I've not encountered it.

It's not hard to fold. It is however, hard to keep track of the directions on the folds. Many of them are bidirectional. 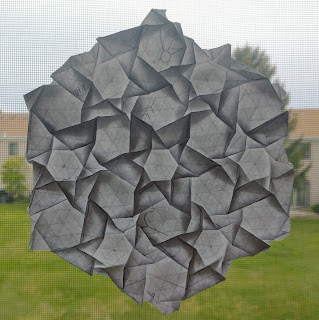 So finishing a cohesive pattern kind of results in a lot of trying to keep track of which fold went which way and trying to determine what makes a sensible pattern to you.

Circular or linear or something else altogether.

Using a 32 pleat grid further clouds the process since there are no full repetitions.