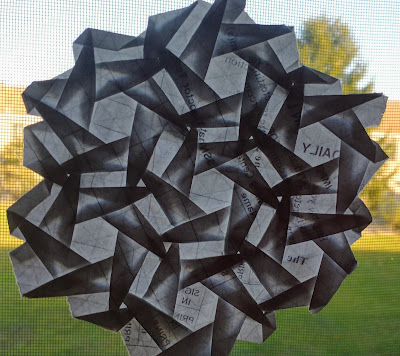 I found a crease pattern by Daniel Kwan that I was interested in folding. I don't remember what he called it.

Update: He called it Triangle Tessellation 2.

Tried to look for it again, but I couldn't find it the second time around.

Update: I found it on happyfolding.com via a link in instagram.  Then happyfolding had a link to the original crease pattern at his flickr.

It didn't look difficult, but it actually was quite intense.  I missed the warning at happyfolding that said how hard it was. . My first attempt failed

So I decided to modify it to make it a little larger and therefore somewhat easier to execute. It was still really hard. Maybe my cheap paper is partially to blame.

But I was able to complete my modified version.

His used small offset hexagons. I just bumped it up to regular open back hexagons. There are right triangles off of the hexes and rectangles bridge the gaps. Some triangles are also a part of the equation on the backside.. 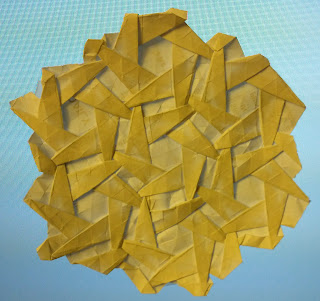 I think I have a crease pattern somewhere. Will add it, if I find it.

I thought increasing the size  would make it a lot easier. It did not. It only made it just barely possible. For me anyway. But I'm okay with possible.