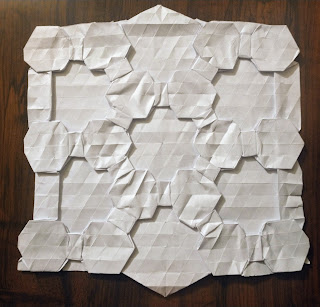 This is an update to my post from September about a really interesting tessellation that I struggled to execute properly.

The fold was by OrigamiYonca. The design was by Arseniy K.

While the mechanics of it came rather easily, the folding of it escaped me.

My first attempt with printer paper failed. My second attempt was moderately successful, but I realized I couldn't upload a pic because of what was printed on the paper and an NDA.

I tried again with different paper and no joy. 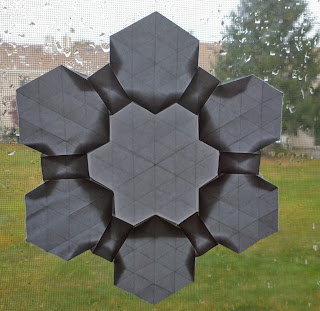 Switched back to regular paper and easily folded a single module version.

Still, I felt I had to complete the more challenging fold.

I used larger paper. Almost twice the size. Sadly, the paper was not as sturdy as I had hoped.

The tessellation was finally completed, but it was rough, to say the least.

I learned that I do not enjoy using large paper for tessellations. My hands and fingers are simply too small for the task.

Nevertheless, I  felt that I had more than met the challenge. Satisfied, I moved on to other ideas. My mind fresh after having climbed that mountain.

My Origanl Post of this extremely difficult tessellation has the crease pattern for those mad enough to attempt it.