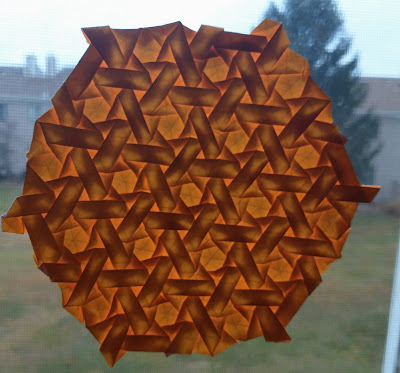 This is another tessellation by Arseniy K that I fussed over until I had it figured out at last. Once I'd discovered the crease pattern, I realized it was going to be pretty tricky. It's small and compact. Still, I pressed onward, in spite of my doubt.

It took a while to fold. The paper I was using was not thrilled about what I was trying to do to it.

Eventually, it acquiesced to my stubbornness and I had success.

I found it very helpful to work mostly on  the reverse side.


I was never confident I would actually complete the fold, but I had nothing else to do other than try. I continued on despite my ambivalence and it did come to fruition. 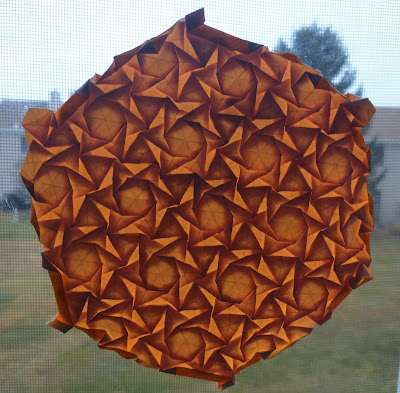 That's the thing about tricky folds... they simultaneously inspire and intimidate me.

It's an interesting experience to see the paper go from a floppy mess of grid and pre-creases to over time finally surrendering to these mad configurations.

It's almost an addiction. Or maybe it literally is.

I do have a crease pattern, but I haven't photographed it yet. Will add it at another time.

But it's pretty obvious from the back side photo that it's tiny stars from offset set hex twists repeating.