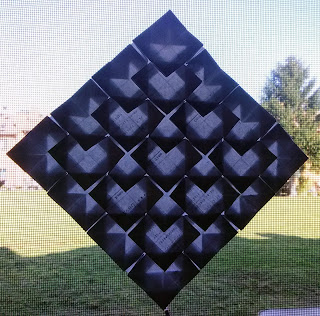 This is a variation on Eric Gjerde's Five and Four tessellation. Using a square grid I made the paper four rows by four columns of squares with no borders between or around the margins. As with Eric's original design I just used 90 degree pleat intersections to create the squares pattern on the paper.

It's a 32 division grid. Each square is 4 wide. There are 4 pleats between each square. Everything is 2 pleats in from the edge. 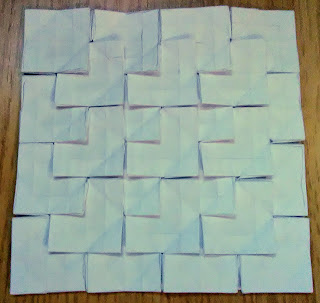 As always, a single sheet of paper was all that was used. It was a typical 8.5x11 piece of printer paper that I trimmed to a square. I really like regular printer paper for tessellations as it is sturdy enough to hold up to many folds, yet pliant enough to manipulate without too much trouble.

It's fairly easy to fold once you've familiarized yourself with the 90 degree pleat intersection technique, yet it yields some pretty impressive results.