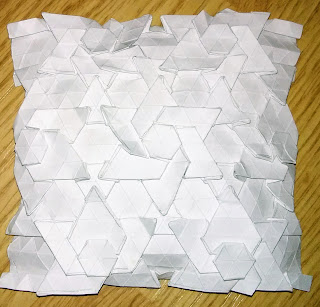 The star twist and its extended version have been thoroughly documented in print and on the Internet. It's an easy design to fold that yields pretty impressive results.

There are a whole lot of rabbit ear sink folds, which do make it a little tedious. But as far as concepts go, it's fairly simple to understand.


It's a straightforward crease pattern to follow. The trickiest part is all those rabbit ears so close together. It won't flatten much until you've done a lot of them. So the paper can be a bit unwieldy for a good portion of the collapsing. But once you begin to get those creases into place they tend to remember themselves.

I like to do the hex twists first. Flattening each and then unfolding. Then do most of the rabbit ears and really get those all in place. Unfold again. Now assemble starting with the central star and working outward using all those preformed creases to let the paper naturally fall into place. 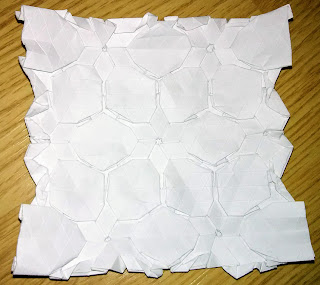 I actually really like how the rear of the design turns out when completed. It's often quite helpful when doing rabbit ear sink folds to go to the back of the paper to make sure the creases are landing where they should and to clean up their alignment a bit.

In a lot of tessellation patterns I've found it quite enlightening to go to the back of the paper. When I'm not 100% understanding how to complete a fold switching to the reverse side has often been what fully illuminated the mechanics of it for me.

So if you're ever stuck on how to work a design, I would recommend checking out the rear.