For the Love of Triangle Twists 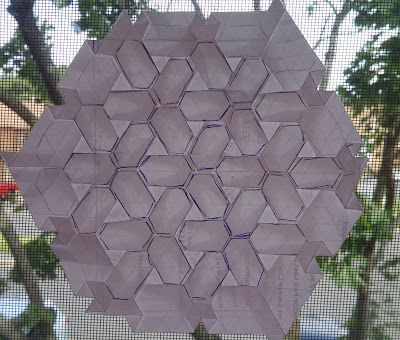 This is another tessellation where I saw a photo  online and made the effort to figure out how to recreate it. I don't know the source to credit. But when I first saw the picture I thought it was brilliant in its simple elegance.

I totally complicated the process of figuring out the construction. I added way more triangle twists than were necessary.

Eventually I realized that I was making it harder than it actually was.

There are a lot of triangle twists, but when I took a step back I realized where each belonged and how they made sense in the whole.

It's an interesting composition in that it's centered around triangle twists. I usually start tesses I'm creating around hex twists and work from there. This one is all triangle based.

I really like this pattern. All props to whoever originally came up with it. It's simple, but complex. Which is the true earmark of a great origami tessellation. 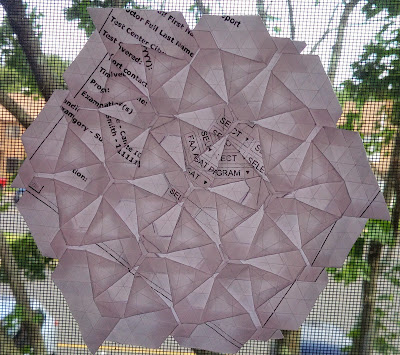 In the photo of the rear of the tessellation you can see the large triangle twists that connect the 'blades' that appear on the front.

There are also small triangle twists at the center of each repetition.

They are not essential to the fold. Pleat folds can be utilized. But they do make for an easier flat fold and a more fluid end result.