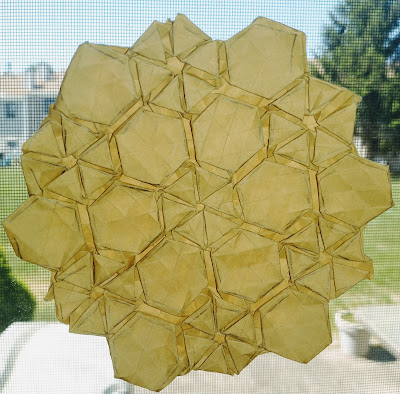 I had seen a pic of a tessellation someone had done that was the classic circle of flagstoned triangles surrounded by large blunt pyramids.

This led me to wonder what other shapes might possibly be able to tessellate around that familiar circle of triangle twists.

That is how I arrived at this configuration.

It begins with the familiar flagstone circle of triangles emanating off of a small hexagonal twist on the reverse side. It's from there that I wondered how open back hexes would work as the next layer.

It turns out that they work out quite nicely.

Oddly offset parallelograms form on the back to reconcile the shapes on the front.

I had been fumbling around with ideas for flagstone open back hexes for a while and not really finding anything useful when this idea came quite suddenly. It all just coalesced pretty rapidly.

I used kraft paper thinking its sturdiness would be helpful, but it was actually really difficult to fold a true flagstone using such thick paper. I suspect it would've turned out a little nicer had I used slightly more flimsy paper.

But perseverance paid off and the final result eventually came to fruition.


A crease pattern is below 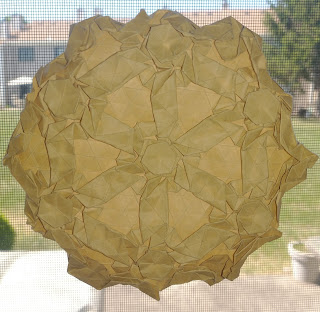 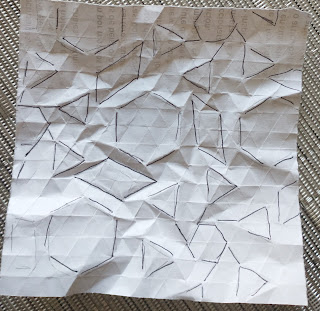